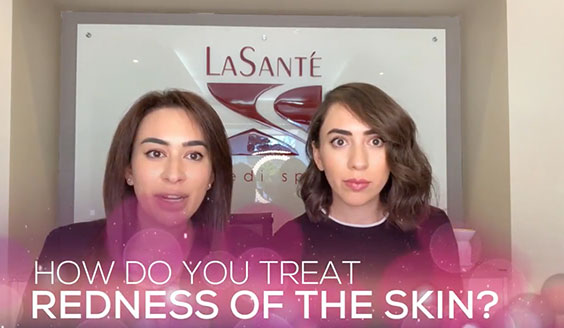 Something that a lot of clients seek treatment for is redness of the skin. Redness can be seen in a couple of different ways. Firstly, it can be seen as an overall diffuse redness across the skin, usually affecting the top of the cheeks and the nose, the forehead, and the chin area. Or it can be seen as little, kind of snake-like capillaries that come up to the surface of the skin and become visible. And again, usually around the nose and the top of the cheeks.

So today we thought we’d speak a little bit about redness, what causes it, and what treatment options are available.

Great. So when it comes to redness, there are a few different factors that can determine if somebody will or won’t have this issue. The first thing is there’s a really strong genetic link, so you look to your family members. Generally, if they’re red, you’ll be red too. So that’s the first thing. The next thing is lifestyle factors. So things like having spicy and chili food constantly, alcohol, specifically red wine, that can really bring on redness. Also, things like hot showers used constantly and being next to a heat source. For example, one of our clients, she works a pizza oven at her family’s restaurant, and that is not helping her redness because it’s that constant source of heat next to her, causing the skin to flush constantly and causing those capillaries to weaken and then snap.

Absolutely. So you might think what’s so bad about having kind of rosy cheeks or a rosy glow. The problem, I guess, happens when, if you don’t get treatment, the walls of your capillaries can become weak, and they don’t snap back as easily as they used to, so they remain dilated. And with time, you just get redder and redder and redder, and what it can lead to is the appearance of those capillaries at the surface of the skin.

Exactly. So it’s something that we see quite commonly in people who work outside, so surfers, farmers, tradies who are outdoors a lot as well. They’re pretty much people that come to us and sought out treatment because they’re noticing it’s getting worse.

There are two treatments available to help with the redness. The first one’s a 1064 laser. What this does is it helps heat up the blood in these broken vessels and coagulates them, therefore causing the blood vessels to shut down. So this is a great treatment for, obviously redness. And we come along into any specific broken capillaries around the nose or on the face. We put more energy into those, and they coagulate and shut down. Another good side effect, if you will, of this treatment is it really helps with pore size and overall skin texture and glow, so dual benefit.

The next thing that we would recommend is an IPL laser, so an intense pulse light therapy. What this does is, again, it shuts down the blood vessels by coagulating the blood inside of them, and it has, again, the same side effects of the glow of the skin and the pores as well. So those two things we’d really recommend.

There are some things that you could be doing at home to help with your redness as well. The first and most important thing is making sure that you’re wearing an SPF of at least 50 every day. The second thing is daily use of a vitamin C serum. What that helps to do is strengthen the walls of the capillaries to make them a little bit more resilient. And thirdly, the other thing you can do, which also helps is to avoid any triggers that are making your redness worse. So things like spicy food, alcohol, all the things-

All the fun things.

-that Tina mentioned before, which we know is difficult, but just even trying to cut down on those things can really help as well.

So these treatments are available at both of our clinics, here at West Pennant Hills and Granville as well. And again, after a VISIA scan we’ll be able to determine what the best treatment is for you and take it from there.

Something that a lot of clients seek treatment for is redness of the skin. Redness can be seen in a couple of different ways. Firstly, it can be seen as...

Something that we see very commonly in our practice our patients that come to us to look for treatments for...

‘I’m so glad to have found this place, they have the best resources that actually show results on the skin. All of my scars are gone and my skin is so much better. I have been to many places in the past and have not gone back since coming to La Sante.’

This will help us on the day of your visit. Select as many as you like, or skip this step.